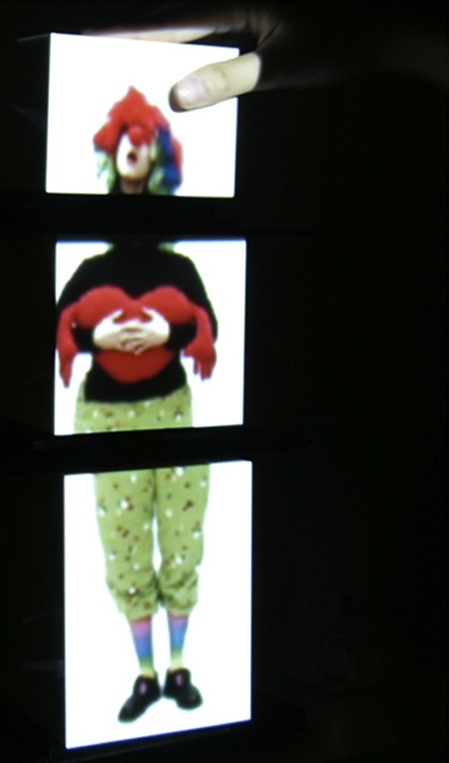 Elevator pitch
Zig Zag Muzig Block (ZZMB) is a three-block-structured interactive visual music toy. In this work, blocks work as the sound controller as well as the visual container. This upgraded version of the analogue mix-and-match character toy, ZZMB allows users to compose a new character’s moving image by twisting the blocks in order to mix and match four different singing characters.

Connecting visuals to the musical changes through the play

ZZMB transforms the physical structure of character blocks into a musical composition. Each block plays character’s voice, harmony (chord) and rhythm (beat) of music, which are written as parts for complete scores. When blocks are arranged to compose a fully matching character, users can hear the specific score. Users can alter the music by applying a different voice, chord or rhythm from other blocks. A block’s linear position controls the pitch of the sound. When users slide the blocks so that a body part is separated from the rest of the body, they not only create the visual illusion similar to zig-zag lady magic, but they also shift the pitch off-tune they are listening to.

There are numerous works that strive to connect physical activity to musical experiences. ZZMB shares this basic idea, however, it focuses on the concept that human beings are themselves the greatest instruments. Therefore, ZZMB intends to create an environment where the interactivity does not overwhelm the performers’ virtue, but only enhances the excitement of the performances. It adapts the economic format of the three-block-system from the analogue mix and match character toy and successfully redevelops it as an interactive system. Currently being built in a life-size scale, ZZMB (version 2.0) attempts to be nearly equivalent with live human performances.

Rotating Block will change the image of the character and change the tune at the same time.

Sliding block will move the body part from the rest of them and will make a pitch shift off-tune.

Documentation video (You need to turn on the speakers)

Technology
ZZMB is currently built on custom-built electronic circuit (basic-programmed Pic Microcontroller and sensors) and connects the circuit-running blocks(built with plexis) to Computer (software written with Max/MSP/Jitter) through Midi connection. It makes use of image projection and sound processing.